Success is in Store 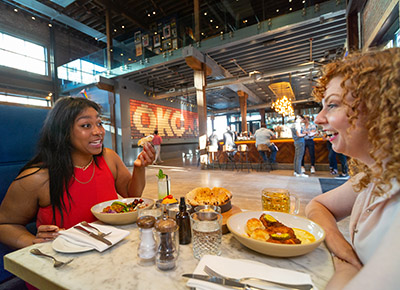 Why Oklahoma City? The numbers just make sense. Oklahoma City’s thriving and diverse economy has created a population boom and one of the lowest unemployment rates in the nation. Population growth combined with disposable income equals one thing for developers and retailers: success.

The numbers behind our recent growth are staggering. Oklahoma City is one of just 14 cities in the U.S. to gain at least 100,000 new residents between 2010 and 2020. Since 2010, the OKC MSA has added 165,000 residents. In fact, of the 40 metros growing larger than Oklahoma City we are growing at a faster rate than two-thirds of them. Our metro is now home to more than 1.4 million people.

But the reasons national and local retailers alike are finding success in Oklahoma City goes way beyond growth. A robust economy means our citizens are working and have disposable income to spend. OKC is currently in the midst of some of the lowest unemployment rates our community has seen in 30 years. Through late 2021 and early 2022, the Oklahoma City metro consistently ranks in the top 5 lowest unemployment for major metros.

READ ABOUT WHY OKC IS IDEAL FOR RETAIL

What fuels this booming economy? An economy whose diversification surprises most. Longtime thought of as an energy-focused economy, that was subject to the boom and bust of oil prices, leadership in our region has spent the last 30 years strategically diversifying our local economy.

We’re here to help you find the retail success that so many others have found in Oklahoma City. Whether it’s site location assistance, demographics, incentive questions, or even just a chat, we’re here for you.