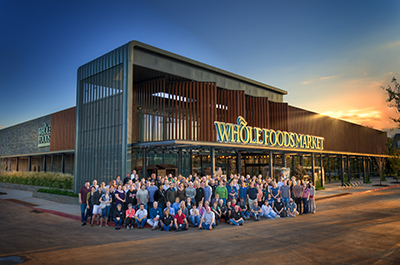 Within the first year of opening in Oklahoma City, Whole Foods expanded its retail space in order to meet the growing demands of its customers. Considering Oklahoma City’s low cost of living and above-average per capita income, Whole Food’s success isn’t surprising. But even for Steve Cramer, general manager of Whole Foods Market in Oklahoma City, the positive response was overwhelming.

“It’s been phenomenal to be located here and have the outpour of people from around Oklahoma – Norman, Moore, all over the place,” said Cramer. “We have this built-in clientele that just wants to come in be part of the store. The guests are so fantastic in how much they really have come to love our selection and our local products.”

Oklahoma City’s location as a central point in the state gave Whole Foods an opportunity reach a large number of people, a fact that Cramer called the biggest benefit to being located in Oklahoma City.

“Oklahoma is huge – there is a ton of people who live over a large area,” Cramer said. “We actually had to add on to the store in our first year that we were open.”

The Whole Foods Market in Oklahoma City attracted high-energy employees that genuinely loved the Whole Foods brand, and according to Cramer, they have no trouble filling the employee roster.

“Our team members are really excited and enthused about working here,” Cramer said. “They are super passionate. I couldn’t ask for a better base of team members anywhere around the country, and I have worked all over.”

Cramer, who also worked at the Whole Foods Market in Tulsa before relocating to Oklahoma City, commented on the City of Oklahoma City’s support as being crucial to the store’s initial success.

“We had a contact with the City and they absolutely embraced us and said, ‘whatever we need to do, we will get out here and help you out,’” Cramer said. “It was a great partnership. It went much faster and much smoother than a lot of our stores do in other cities around the country.”

“It’s a fantastic partnership – better than anywhere else I have ever been,” Cramer said.