Menu
âOKC ranked No. 2 for lowest cost of living among large citiesâ
-C2ER

Penn Square Mall has been part of Oklahoma City’s retail landscape since it was constructed as an outdoor shopping center in 1960. While its ownership has changed over the years – Simon Property Group acquired the mall in 2002 – Penn Square Mall is still a leader in upscale regional shopping and is currently the largest retail property in the state of Oklahoma. 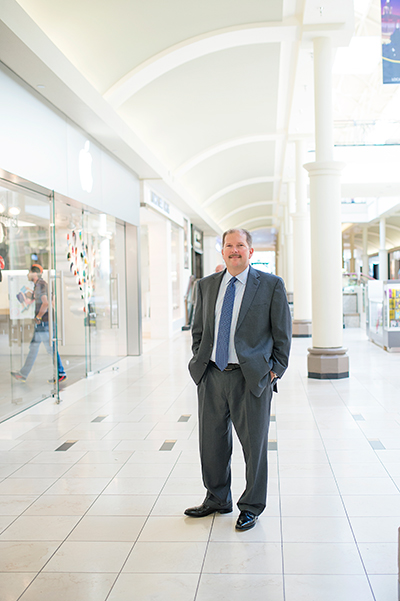 Alexander works to recruit high-end retail to Penn Square Mall’s growing list of stores in Oklahoma City, a city that he views as an extension of the Dallas retail market.

“Many national retailers, particularly some of the top-tier luxury retailers, certainly don’t have Oklahoma on their hit list, and our job is to convince them that it should be,” he said. “We find a lot of interest once the tenants realize what the sales per square foot coming out of Oklahoma City are. It’s been such a great success story, that I guess, in some respects, it sells itself.”

“In this part of the country, this is one of the best malls that we have in our portfolio,” Alexander said. “This mall produces sales per square foot higher than some of the very top regional malls in the DFW market. We’ve seen growth in sales every year that we have owned the mall. It is a great market for us.”