Land use and strategic development plan for Innovation District introduced 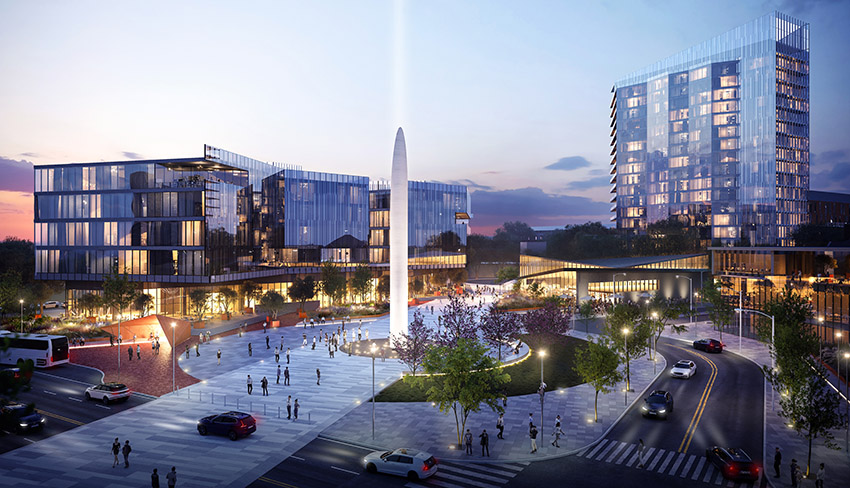 A planning team led by Perkins + Will (P+W) has determined the types of development necessary for Oklahoma City’s Innovation District to become an even bigger economic development driver.

The land use and strategic development plan, introduced today, follows a 2017 study by the Brookings Institute and Project for Public Spaces, which created ideas on how the district could bring in more jobs as well as develop amenities for the underserved neighborhoods adjacent to the district.

The Innovation District is anchored by the Oklahoma Health Center and Automobile Alley and includes the surrounding neighborhoods.

With the implementation of the first phase, the district has the potential to create more than $1 billion in annual additional economic impact and generate $423 million in additional annual labor income. 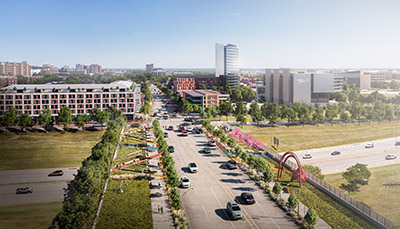 “We want Oklahoma City to be the place where people relocate to for their next research project, whether that’s in bioscience or energy,” said Katy Boren, Innovation District president and CEO. “Having productive and functioning spaces, with access to other powerful minds, will make us a destination for the next generation of researchers.”

Brookings recommended creating a strategic plan for development and land use within the district. The P+W plan takes the recommendations from Brookings and the Project for Public Spaces and creates a framework that can be used to attract the right development in the best places.

Perkins + Will was tasked with creating a plan that showed how the city and state entities could develop a dense, active, safe, and well-connected mixed-use environment. The land-use plan focused specifically on the area that includes the Oklahoma Health Center, the University of Oklahoma campus and research park, the state capitol area, and the adjacent neighborhoods, and the retail district known as Automobile Alley. 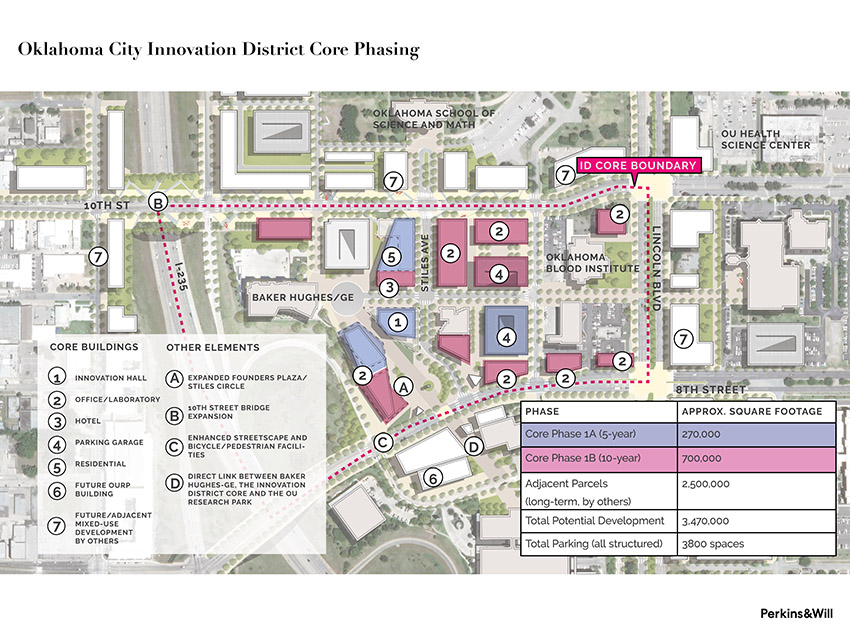 P+W Principal Stephen Coulston said he’s enjoyed working with the city leaders, who are focused on lifting the whole community.

“It has been a remarkable experience to work in a city that is so committed to taking control of its destiny and making bold, visionary moves,” he said. “The investment in the Innovation District is the next step to OKC’s future. The partners, assets, and resources coming together to create the OKC Innovation District are truly remarkable, and with the intentional implementation of this land use and development strategy, I am convinced that OKC will continue its resolve to be a leading innovation destination while bringing further pride to the community as a whole.”

Nearly 500 stakeholders participated in community outreach opportunities including community meetings, surveys, interviews and focus groups. Those participants frequently cited the Jewel Theatre, Douglass High School, the Henrietta B. Foster Center, Washington Park, and historic homes as key assets in the area. Keeping the historically black churches and schools in place was another concern expressed by the community. 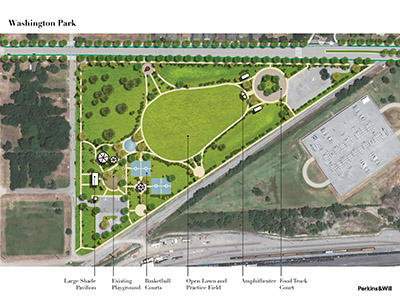 “Working with the nearby residents was a concerted effort to make sure the adjacent neighborhoods’ concerns and desires were addressed as the Innovation District continues to grow and prosper”, said Cathy O’Connor, president of The Alliance for Economic Development.

“The Innovation District is home to jobs for people of all educational backgrounds, so we want everyone to feel welcome to seek employment opportunities,” she said. “We can create an environment with seamless integration between the neighborhoods and our innovation assets – a place where the people and the spaces fuel each other’s success. With these inclusive development strategies, we will increase jobs and economic security for residents in the surrounding neighborhoods.”

Some of those assets should be updated, according to P+W’s study, though there’s also room for new additions.

According to the study, the best location for the first two phases of development are around the historic Stiles Circle and the Beacon of Hope. The key component of this development is Innovation Hall with a connecting plaza. Modeled after District Hall in Boston, Oklahoma City’s Innovation Hall would provide co-working and event space that would help bring the district together both inside and outside normal working hours.

Another update needed for the area, the planners found, was better connectivity within the district boundaries. Perkins + Will said one major connectivity need is to enhance the 10th Street highway bridge over Interstate 235. The expansion wouldn’t be a cap; rather, additional space for walking and cycling.

Besides new development, existing buildings were found to potentially be nodes for supporting innovation activities. P+W said the Henrietta B. Foster Center should be remodeled into a Center for Small Business and Entrepreneurship, which would also support an idea from the Brookings study. Brookings suggested that the anchor institutions attempt to purchase more goods and services from local businesses. Making the Foster Center into a small business hub would help nurture entrepreneurial growth, which could later serve the district’s institutions.

Not only did P+W find existing buildings with potential, but also existing public spaces. Updating Washington Park could provide another place for needed connectivity, according to Perkins + Will. The park sits at the corners of NE Fourth and High Streets. Community input during the planning process made it clear that Washington Park is important to the existing neighborhoods. Improving the park would help it become a center of neighborhood activity.

Greater Oklahoma City Chamber President and CEO Roy Williams said he thinks as people see the strategic development plan and the potential to add more commercial buildings, it will inspire private investment in mixed use amenities including retail and housing, as well as more office space. “Having must-visit spots within the area only enhances the ability of the existing organizations to recruit talent”, he said.

The land use plan is nearing completion and after a public comment period, will go to the city planning commission and city council with the goal of being adopted as an amendment to PlanOKC, the city’s comprehensive plan.  Once the land use plan is in place, private developers will have a better idea of where and what types of projects are needed to further excel the district.

“This Innovation District is crucial for Oklahoma City,” Williams said. “The continued diversification of our economy will secure our economic future. Cities around the world are investing to be at the center of innovative and disruptive technologies that will set the future course. We need to be ahead of developing industries, rather than behind.”