Oklahoma economy on the rebound in 2022 per Outlook 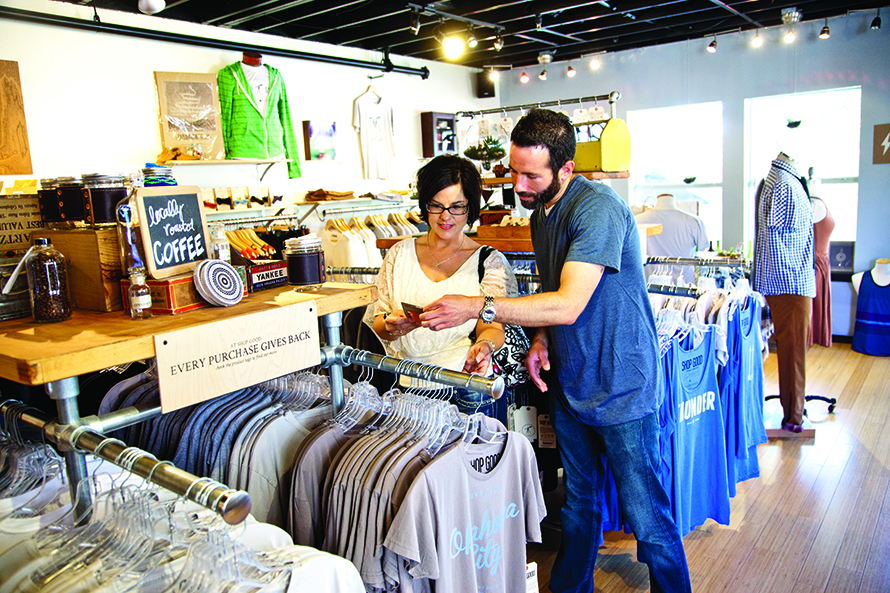 Editor's note: This is an excerpt from the recently released 2022 Greater Oklahoma City Economic Outlook.

Two economic realities merit brief attention before turning to the outlook for the coming year. The first is the contrast between Oklahoma and the U.S. pandemic recessionary experience, and the second is the continuation of longrun influences reshaping Oklahoma’s economy.

Oklahoma’s economy was struggling to maintain even modest growth in the buildup to the pandemic. Led by weakness in the state’s energy sector, the economy was threatening a mild recession as 2019 turned to 2020. Oklahoma’s four-quarter real GDP growth consistently trailed that of the national economy from 2018 Q1 through the middle of 2019. When the initial rounds of health policies designed to restrict the flows of social and economic activity were implemented, Oklahoma’s real GDP contracted more sharply than U.S. real GDP. In the ensuing recovery, U.S. real GDP growth outpaced growth in the state. The effect of the differential growth is a U.S. economic activity that recovered its pre-pandemic level by 2021 Q2, compared to an Oklahoma economy that had failed to do so. 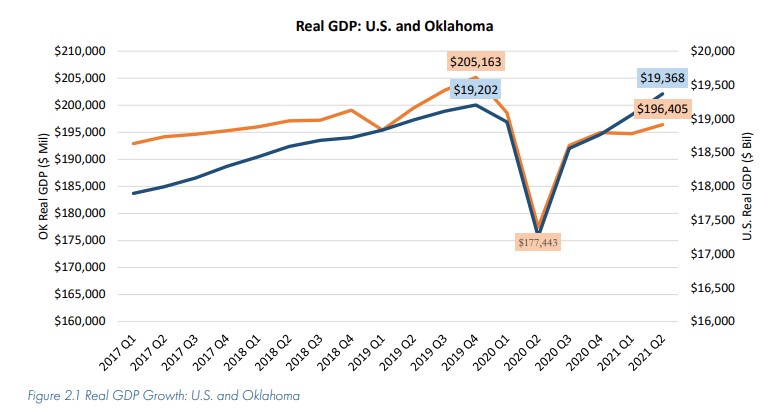 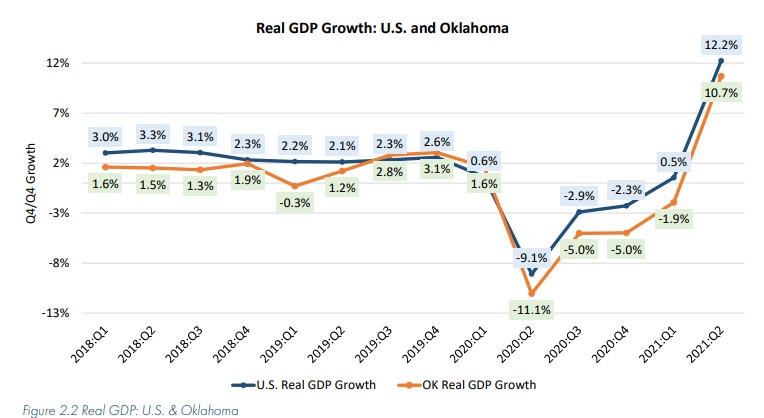 In contrast to measures of total economic activity (GDP), Oklahoma’s labor market experience was more muted than the national experience. Nonfarm payrolls did not fall as sharply in Oklahoma and had a less exaggerated rebound when the most severe health restrictions were lifted. The result will be fewer nonfarm jobs on the payrolls of Oklahoma employers to end 2021 than existed at the end of 2019 just before the onset of the pandemic.

Surveys of Oklahoma employers indicate the number of jobs on nonfarm payrolls is down about 50,000 jobs from the pre-pandemic peak of 1,701,700 jobs. Oklahoma is on pace to return to pre-pandemic payroll levels by mid-2022. Where Oklahoma’s experience diverges from the national experience is in estimates of the household labor force and employment. Both measures have returned to pre-pandemic levels, suggesting that there is no latent labor supply waiting on the sidelines of the labor market to fill the vacant payroll positions. Similar to other parts of the country, the labor market in Oklahoma is legitimately tight, and challenges to fill vacant positions along with upward pressure on wages will persist into 2022. The labor market challenges will be felt broadly but most acutely in hourly wage positions and the leisure and health care sectors.

Oklahoma’s recent experience emerging from the brief, but significant recession offers some important signals of strength. The strength should carry into 2022 and sustain some residual momentum, even as a new policy regime is implemented. Also working in the state’s favor, though not uniformly so, are the continuing long-run influences concentrating social and economic activity in urban areas in the south and west. 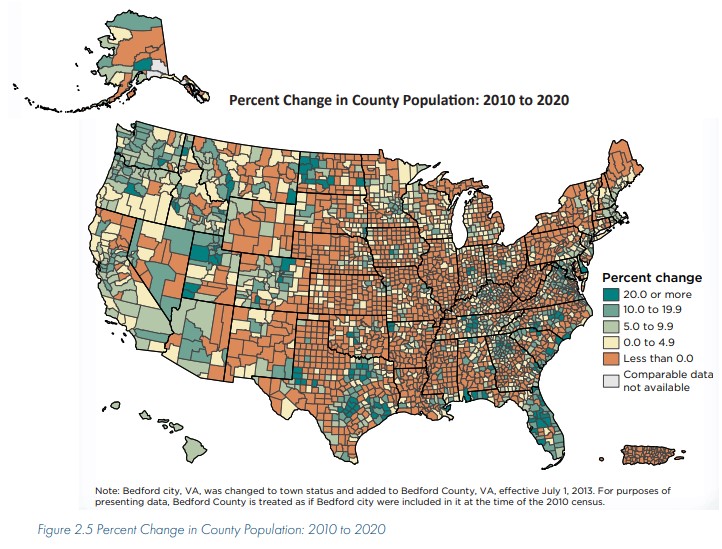 The picture above was recently pulled from the homepage of the U.S. Census Bureau. Counties in red lost population between 2010 and 2020. Much of rural Oklahoma participated in these population declines. In contrast, counties in darker shades of green gained population over the period, with the darkest shaded counties gaining population at a transformative rate. These pockets of robust population growth tend to be south and west. Oklahoma is heavily influenced by the fast-growing I-35 corridor with exploding population centers in Texas. Oklahoma City sits on the northern edge of the faster-growing southern portion of the corridor while cities such as Tulsa, Wichita, and Kansas City feel the corridors influence on the slower-growing northern stretch. The forces reshaping the U.S. economic landscape are longstanding and will continue beyond this pandemic period. For Oklahoma, this implies a future increasingly defined by three distinct economic geographies. 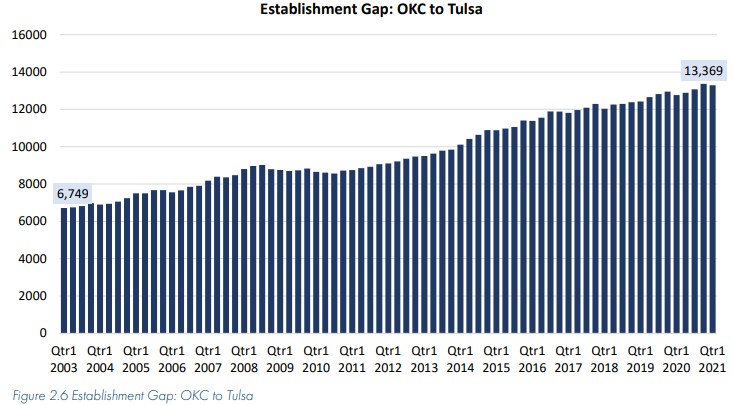 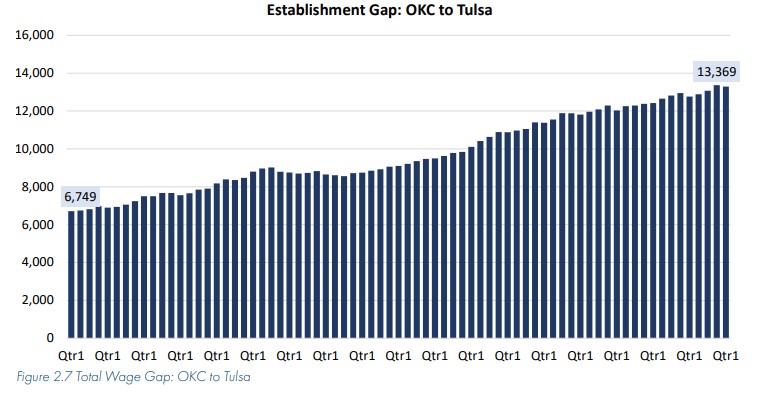 As we transition to a discussion of the year to come, the realities previously discussed help to shape our perspective. The first is that Oklahoma is firmly embedded in recovery mode with much federal policy support still lingering in the system and the strength of household balance sheets carrying momentum into 2022. Even an aggressive shift in policy is unlikely to immediately derail this momentum. Instead, it is more likely that labor markets stay tight, upward pressure on wages and prices persist, and economic activity expands. The downside risks to the outlook are more likely to materialize only later in 2022 and into 2023. The second is that the forces of economic geography continue to reshape the state’s economic landscape. In contrast to the uncertainty surrounding the medium-term outlook, there is little uncertainty about the long-run reality that the economies of Oklahoma City, Tulsa, and the rest of the state will continue to diverge with the passage of time.

Economic activity is expected to start the year strong before decelerating as the year proceeds. Economic growth is likely to be much harder to achieve in 2023. Real gross state product (in blue) contracted in 2020 at a 4.9% pace during the onset of the pandemic. Production picked up in 2021, but only with the anticipated growth of 2022 (up 5.6%) will gross state product recover to pre-pandemic levels. Pandemic response policies moved personal income to 3.8% higher in 2020 even as total economic activity receded. Growth rates for personal income in 2021 and 2022 are deceiving as they are measured in nominal values (not adjusted for inflation). The economic tension in 2022 is the strong position of households and lingering economic support to start the year against the shifting policy regime as the year progresses. The balance is likely to shift to markedly slower growth in 2023 while significant downside risk is yet possible. 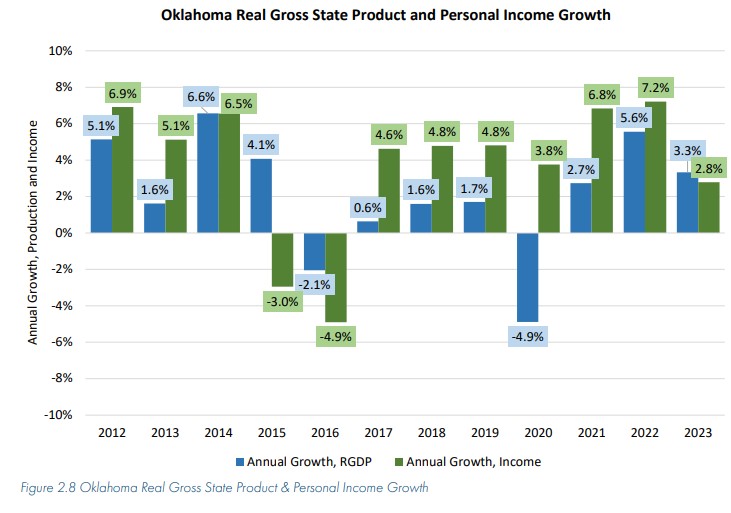 Nonfarm employment data series can be decomposed into a collection of goods-producing industries and a collection of service-providing industries. The former is composed of mining, manufacturing, and construction while the latter encompasses everything from retail services and leisure services to professional and technical services. Often discussed is the reality that Oklahoma employment is increasingly concentrated in the services sectors. This shift towards employment in services reflects in part the urbanization of Oklahoma’s population and the cluster of service-providing industries that support population density, as well as technical advances that are making mining and manufacturing less labor-intensive. But a shift towards services employment does not imply that those industries are less economically significant. In fact, while the share of employment in the goods sectors fell from 18% in 2001 to a projected 4.5% in 2023, the share of state GDP from mining and manufacturing has risen from 20.9% to a projected 28%.

As 2021 turns to 2022 Oklahoma’s population will cross four million persons. Population growth slowed somewhat in the second half of the last decade, currently averaging 0.5% per year. Growth is expected to fall just shy of that mark in 2022 before accelerating modestly in 2023. As the population of the state grows, the distribution of the population becomes increasingly uneven with gains in urban areas, led by Oklahoma City, offsetting losses in the state’s rural areas. After jumping in 2021 and 2022 from an aggressive policy response, per capita personal income in the state will grow at a modest 2.1% in 2023 to end the outlook period at $57,883. 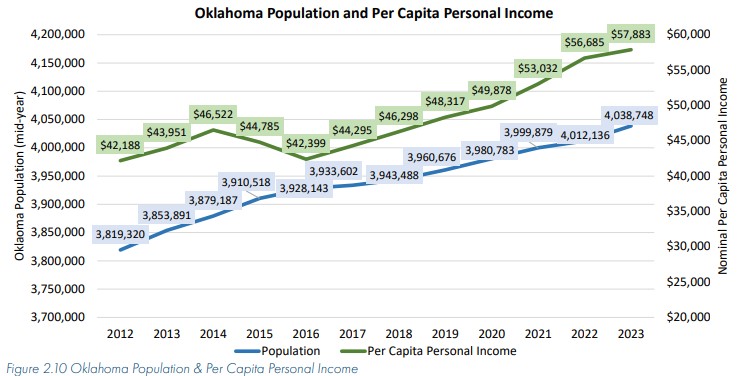 Private sector payrolls in the state are expected to post strong job gains in 2022 as the labor market continues to recover. Private payrolls averaged 1,352,000 jobs per month in 2019 before the pandemic and likely won’t hit that mark again until 2023. Private job growth of 3.5% is anticipated in 2022 and reflects an expectation of a strong start to the year and continued demand for labor. It is yet unclear if there is a willing supply of labor to meet that demand. The combination of strong household balance sheets and rapidly increasing wages in the entry end of the labor market continues to support early retirement and a re-evaluation of the household engagement in the labor force. Household balance sheets are eroding slowly and will not enjoy the same level of policy support over the outlook horizon. Financial necessity may accomplish what policy could not and prompt workers to return to formal labor market participation, but they can expect to find fewer accommodating conditions in 2023 with private payrolls growing only at a 1.1% pace. 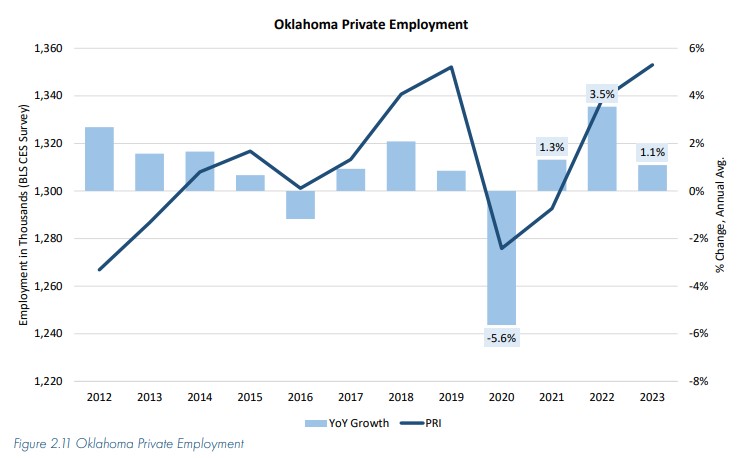 The trade, transportation, and utilities sector is among Oklahoma’s largest employment bases accounting for 305,500 average monthly jobs in 2021. The sector generally grows along with population and oscillates with economic conditions. During the recession of 2016, employment fell across the category including wholesale trade, retail trade, and utilities. In contrast, the 2020 contraction was short-lived and dominated by pandemic-related job losses in wholesale and retail trade. Through both periods, the transportation and warehouse industry has proved exceptionally resilient, growing from 41,100 in 2012 to 62,300 jobs in 2021. Strong demand for services across the entire sector will drive job growth of 2.2% in 2022 before conditions soften in 2023. 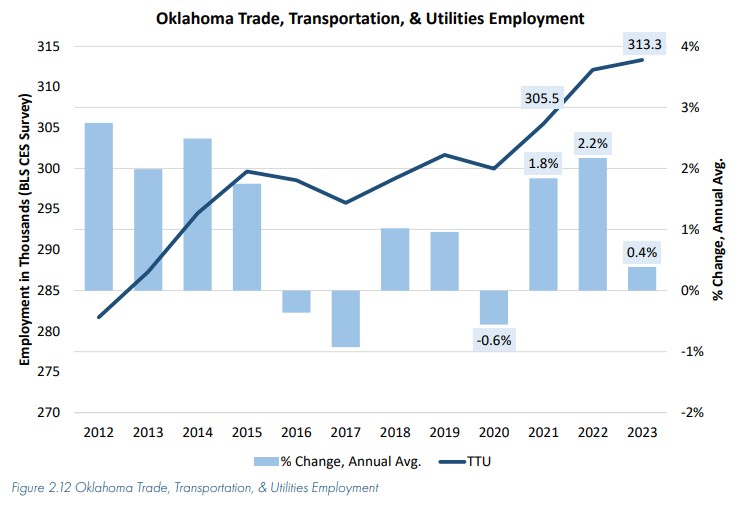 Professional and business services employment experienced a widespread decline in 2020 with average monthly payrolls declining by 6.3% to 183,500 jobs. The pace of job gains is expected to accelerate in 2022 but will face the challenge of finding workers to fill the demand for positions. Growth in 2022 is expected across the sector but is led by gains in administrative and support business services (up 4.7%). Consistent with the outlook narrative, growth slows in 2023 to 1.5% with significant downside risk to the 2023 outlook a distinct possibility. 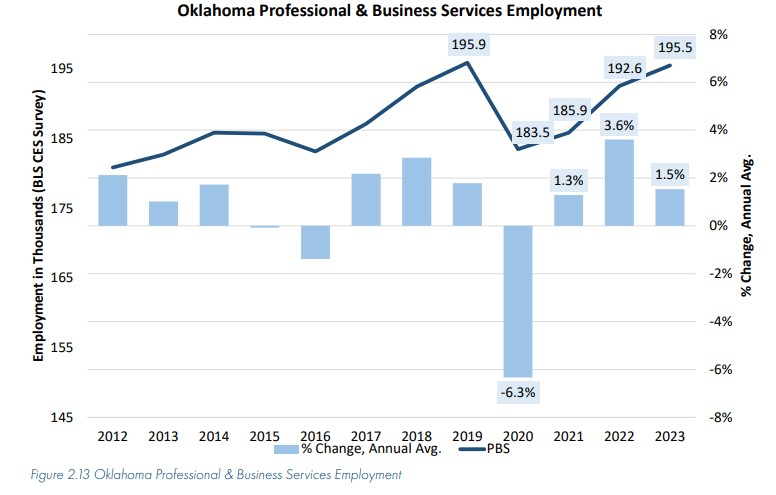