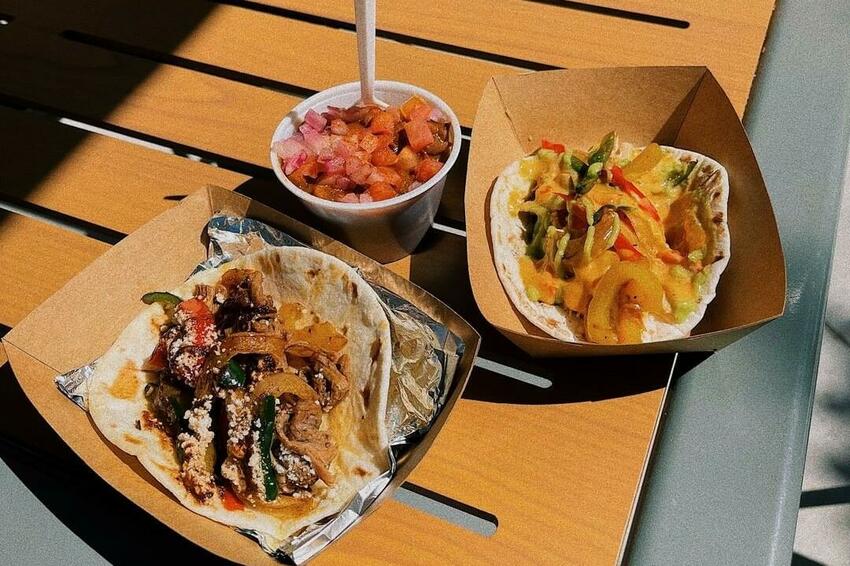 Chefs Eric Smith and Avery Cannon have reinterpreted American taco shop food the way only a team with their creativity could at Chamber member Parlor OKC’s newest kitchen.

The first hint at what you can expect from Disco Taco Parlor is the fact that it’s located inside the food hall directly next door to Pachinko Parlor—Smith’s and Cannon’s whimsical interpretation of what American diners love about sushi. The second hint comes with the first glance at the menu, which features names like Tako Belle, Kyle Skywalker, and Ballgame Nachos.

“We haven’t had tacos the whole time we’ve been at Parlor,” Smith said. “So we thought ‘why don’t we do a combination with some really roots taqueria stuff and then some clever interpretations of tacos?’”

The menu at Disco Taco Parlor bounces back and forth from traditional to downright cheeky with classics like carne asada tacos and quesadillas alongside the “Tako Belle” (a hard shell taco with seasoned ground beef plus shredded iceberg lettuce and cheese) and “The Waurika,” a fried catfish taco with tartar sauce and cole slaw.

Smith, who is also the Executive Chef at VZD’s and the Crown Room, considers himself lucky to have such a big “bag of tricks” to pull from thanks to his long résumé in cooking, and it shows on Disco Taco Parlor’s menu. Smith and Cannon will have the help of management that brings 30 years of experience working in taquerias.

”I love the roots of where food comes from, but I think everything, whether it’s music, art, or whatever, is supposed to take the past and expand on it,” Smith said. Classics like taco salads and churros are available as well, along with staple sides like elotes and beans, plus chips and queso, salsa, and Disco guac.

Disco Taco Parlor is located on Parlor’s first floor. Diners can enjoy tacos order dine-in, for carry-out, or by delivery with Olé, a local food delivery service started in
Oklahoma.

Guests are encouraged to make themselves comfortable in the space’s wide array of seating options on all three levels, including living room-like areas designed to relax and wind
down; a second-level garden patio with excellent views; two first floor outdoor patios; lounge, den, and library areas; a rentable event space; and more traditional, family-friendly high and low-top table seating. Parlor is open from 11 a.m. to at least 11 p.m. on Sunday, Tuesday, and Wednesday; from 11 a.m. to at least 12 a.m. on Thursday; from 11 a.m. to 2 a.m. on Friday and Saturday; and is closed on Monday. Parlor’s kitchens close at 10 p.m. on Tuesday through Thursday and Sunday, and close at 11 p.m. on Friday and Saturday. Parlor opened in Oklahoma City in 2019. The original
location opened in Kansas City in 2018. For more information, visit parlorokc.com.

Shop Oklahoma City Looks like we know where we want to spend the next Taco Tuesday! Chefs Eric Smith and Avery Cannon have reinterpreted American taco shop food the way only a team with their level of creativity could at Parlor OKC's newest kitchen, Disco Taco.