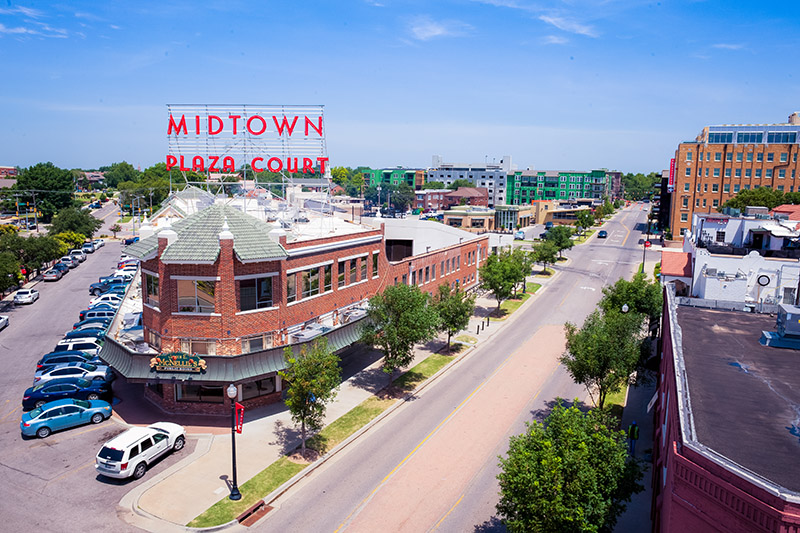 The area now known as Midtown was originally home to the city’s first hospital (SSM Health St. Anthony), first grocery store, first kindergarten and more. Near the turn of the century, homes began being built in what is now the Heritage Hills and Mesta Park neighborhoods, connected to downtown by the original OKC streetcar system through the district along Walker Ave., Broadway, Classen, NE 13th and Shartel, among others, fostering growth in the area. With the dissolution of the streetcar system, the rise of the automobile and the popularity of the suburbs in postwar OKC, Midtown eventually fell into decline and by the '90s was a shell of its former grand self. However, like so many other success stories in OKC, the MAPS projects and other public and private investments helped jump-start a renaissance that began to gain steam by the early 2000s, with developers converting historic properties into new offices, housing, commercial spaces and restaurants. Now an indubitable epicenter of local shops, restaurants, breweries and more, Midtown boasts a true “live, work, play” neighborhood and a great place to support all kinds of local businesses and concepts (as well as utilize OKC Streetcar service once again)!

Chamber member Midtown Renaissance has been instrumental in the district’s revival. According to Chris Fleming, Partner at Midtown Renaissance, the public and private investment surrounding the district presaged good possibilities for the area and prompted the local community-minded development group to action.

Along with the success of early investments came new opportunities, but Fleming and his partners, Bob Howard and Mickey Clagg, were careful to curate the area’s offerings with a specific purpose in mind.

Michelle Blasquez, Midtown District Manager at the Downtown Oklahoma City Partnership, agrees. “There’s something so special about mixed-use neighborhoods. For people who are new to the city or those who don’t have a community yet, it provides that opportunity to get plugged into life in the city.”

Fleming described the team’s approach when looking at tenants and concepts. “We’ve tried to be intentional about tenant mix amongst our retail and restaurant tenants, and we've also tried to be intentional about our overall mix of uses, whether residential or office or commercial or retail or restaurant, and not try to get overbuilt in one area or another. And we try to respond to what the market is saying… being mindful and protective of the tenants already in the neighbohood,” he noted, saying that the team seeks to keep cannibalization from occurring while also trying to create co-location advantages.

“You might have two or three women's clothing stores, but they all sell different lines and they all have their own little niche and they don't necessarily compete as much as they collaborate and complement each other – same thing with the food scene,” he said.

The team has also been purposeful in pursuing local concepts in particular. Fleming discussed some of the advantages of having local tenants, and in some cases, even an owner-operator on-site.

“It's really interesting on the local side of things, because a lot of times the person that locks the door at night, or the person that is greeting the customer, is the person that owns it. And so there's a lot of personality that comes with that from a shopping or dining or ‘recreating’ experience because instead of it just being a generic restaurant it’s a place called Stella Modern Italian Cuisine. And Lori Burson is the owner, and she is going to be the 'hostess-with-the-mostess.' She's going to take good care of us, and this is her place and there's a name and a person behind what's there. And, it keeps the profits in the community.  And these owners are active in the community and neighborhood stakeholders. We're open to national brands, too, and national brands are present throughout the neighborhood-- yet I think any local district must have a local flavor to it -- an organic feel to it. And with the proprietors being present in a lot of instances, it just changes the feel of the experience, and the uniqueness of it … it's kind of quintessential Midtown.”

That’s in line with one of the things Blasquez noted about what she appreciates about Midtown. “I love meeting with owners at their places of business and striking up a conversation with someone in line who lives in the neighborhood,” she said. “Midtown is full of local shops and businesses that bring a lot of joy and character to downtown.”

Fleming says it has taken a lot of hard work and patience on part of the team and their partners, including a number of local banks, but that he is looking forward to the future as the area generates its own momentum.

“As I look back on the last 15 years, we started this when Oklahoma City was a different place.  Devon Tower hadn’t yet been built; I-40 was still the raised crosstown expressway, and our basketball team was the Hornets. Over this time, we've endeavored to be good stewards of Midtown and to contribute to the progress of our city. And as I look to the future, I'm excited for the neighborhood’s continued growth and positive transformation – a transformation that we hope will transcend generations.”

Shop Oklahoma City #ShopSmallForOKC in the Western Avenue District. What is considered one of Oklahoma Citys oldest official districts has been a staple in local shopping for decades.

@okcretail Have you been to La 29? It is home to a diverse group of thriving Hispanic-owned small businesses in our community. Check it out as you #ShopSmallForOKC

@okcretail The excitement on 16th Street makes the @plazadistrict a fun place to live, work, shop, and explore. Check out this spotlight on the district as you continue to #ShopSmallForOKC this month!

@okcretail #ShopSmallForOKC and enjoy all of the wonderful things @Uptown23rd District has to offer. This district, located along historic Route 66, is filled with vibrant shopping and entertainment for all to enjoy.
Welcome to OKC | Property Search | Success Stories | Districts - Regional | Districts - Neighborhood | News
maps | about us | contact us | sitemap