Omni opens with fanfare and 100 guests 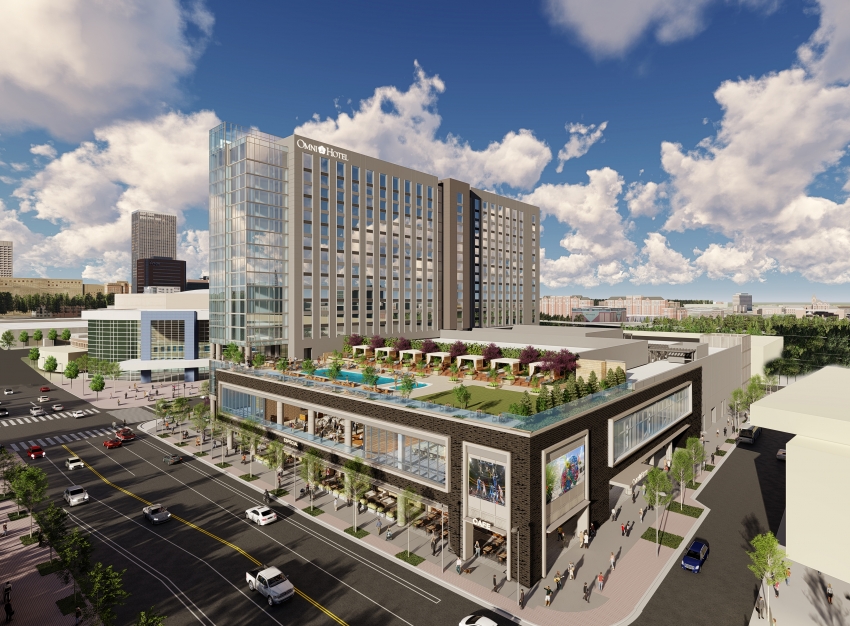 As promised, the Omni Oklahoma City Hotel at 100 W. Oklahoma City Blvd. opened its doors on Tuesday, welcoming 100 guests on its first day in business and ushering in a new era for Oklahoma City’s tourism and entertainment economy.

“Those who walk through our doors, whether you’re traveling to Oklahoma City or you are a local enjoying a staycation or a day downtown, will feel an immediate sense of the deep authenticity and rich culture that this city has to offer,” Omni Oklahoma City General Manager Steve Keenan said. “Omni will offer a new and elegant way to experience an Oklahoma City adventure as we continuously aim to go the extra mile with every interaction and every gesture.”

With 76,000 square feet of flexible meeting and event space, 605 guest rooms including 29 suites, and seven facilities offering food, beverages and other amenities, the hotel – alongside the city’s new Convention Center overlooking Scissortail Park – boosts Oklahoma City into the next tier of national locations seeking to attract conventions and large events.

“Most of the restaurants and amenities in the hotel will be open out of the gate,” Keenan said. “That includes the OKC Tap House, which is the split-level bar and grill that features a lot of Oklahoma beers, and we’ll also open Bob’s Steak & Chop House, which is our fine dining prime steakhouse, and our Park Grounds coffee shop will also be open. What’s really nice about those outlets is that there’s outside access from Robinson Avenue, so it’s very easy access and it’s open to all of our locals.”

The Basin Bar in the lobby, as well as the entire lobby itself, is designed to pay tribute to the Oklahoma landscape, featuring deep, rich tones and natural textiles and components including wood, stone and leather.

“We like to refer to our lobby as Oklahoma’s living room,” Keenan said. “It’s very relaxing, very comfortable. It has a fireplace. It’s just a beautiful environment.”

The Mokara Spa, providing head-to-toe treatments, a revitalizing sauna, nail services and a hair station, opens Thursday, as the spa will be closed on Tuesdays and Wednesdays of each week. The spa is expected to draw a substantial local following and become a popular venue for bridal parties, Keenan said.

The Rare Bird gift shop features items that range from “very reasonable to very expensive” that pay homage to the state and highlight products made by Oklahoma companies, creators and designers, Keenan said.

The Catbird Seat bar at the third-floor pool may not have begun its official season yet, but the bar may be enclosed and is available for private rentals right away, Keenan said.

“Omni Hotels & Resorts is laser-focused on its development strategy and, despite the industry impacts of COVID-19, our expansion across the Red River reinforces our commitment to that strategy,” said Peter Strebel, president of Omni Hotels & Resorts. “We look forward to extending our genuine hospitality into this tenacious city and becoming a new addition to the downtown skyline that Oklahomans can be proud of. Each of our hotels are unique to the community, and Omni Oklahoma City Hotel is no different with a top-to-bottom design that authentically conveys the welcoming spirit of the city.”