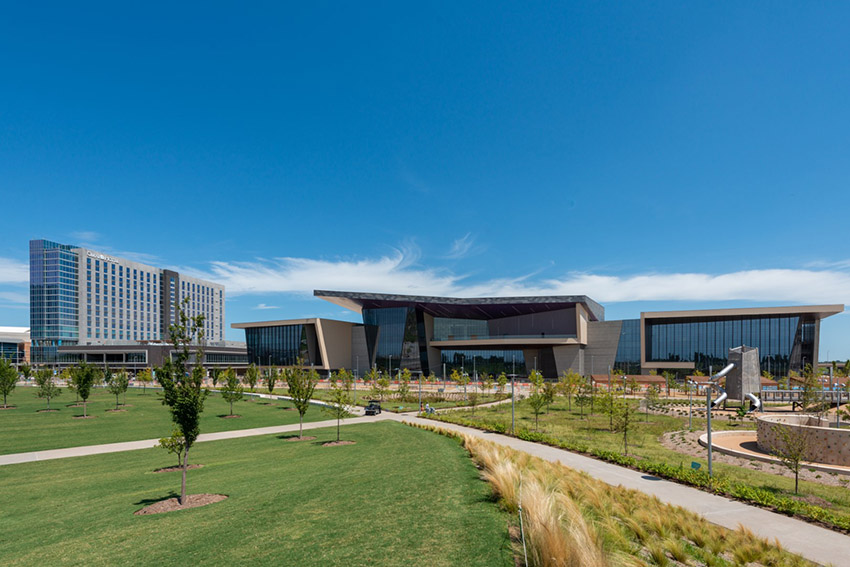 Construction of the $288 million Oklahoma City Convention Center is complete after more than a decade of planning on the largest single construction project in the City of Oklahoma City’s history. The state-of-the-art facility will open debt-free and elevates the City’s capacity for hosting meetings and conventions.

The convention center’s sleek and modern design features sweeping downtown views, and materials intended for energy efficiency and resiliency against the weather. The massive 500,000-square-foot interior includes a 200,730-square-foot exhibit hall on the first floor, which is divisible into four halls. About 45,000 square feet of meeting spaces are on all levels of the building, and many have operable walls to make the spaces flexible. The rooms can be configured to provide up to 27 individual meeting spaces.

The center includes two ballrooms, a 9,700 square foot junior ballroom is located on the third floor and boasts sweeping views of Scissortail Park; and the building’s fourth floor features a 30,000-square-foot ballroom along with pre-function space and a large balcony overlooking Scissortail Park.

“This venue is a vision realized for the Chamber, as we have been championing its construction for nearly 15 years. This is undoubtedly a game-changer for Oklahoma City as we emerge as a strong convention destination,” said Roy Williams, president & CEO of the Greater Oklahoma City Chamber. “We’re already seeing great interest and convention bookings from meeting planners who are excited that OKC provides the full attendee experience their groups expect.”

The building is located east of Scissortail Park along Robinson Boulevard between SW 4th and SW 7th Streets. Like the park and many other important landmarks downtown, it is served by the OKC Streetcar.

“This is a once-in-a-lifetime project for the MAPS office, Citizens Advisory Board, subcommittee and consultants,” added David Todd, MAPS program manager, City of Oklahoma City. “It’s an architectural gem from the floor to the ceiling, and we are proud to complete the project on time and on budget.”

Directly west of the convention center is Scissortail Park, a 70-acre, fully programmed park that will connect downtown OKC to the shores of the Oklahoma River. The upper 40-acre section across from the new convention center opened in September, with the lower 30-acre portion set to open in Spring 2022. The park provides a variety of recreation activities, including concerts, walking/biking/running trails, picnic sites, youth sports fields, play areas, interactive water features, a seasonal roller rink and outdoor education opportunities.

The convention center’s atriums are home to a monumental public art experience called Virtual Sky. The sculptural artwork is an array of anodized titanium rods suspended on aircraft cable alternating with strands of LED lights.

Each individual light is programmed for color, intensity, and duration, emitting light that is then reflected and enhanced by the titanium. The result is a matrix that can display three-dimensional forms moving through space much like clouds.

The artwork was created by Los Angeles-based Narduli Studio led by artist and architect Susan Narduli. At $1.5 million, Virtual Sky is one of the most valuable works in the City’s public art collection and was funded as a part of the City’s 1% for Art ordinance.

OPENING IN A PANDEMIC

Oklahoma City is re-opening at a careful pace and taking the necessary precautions to ensure that meetings and conventions are not only safe, but also easy and enjoyable. The majority of Oklahoma City hotels, restaurants and major attractions are open and receiving increasing numbers of visitors—specifically in the leisure market, amateur sports and equine events.

“As we come out of this COVID and we start to go to doing our meetings, we have to get back our customer’s confidence,” said Al Rojas, general manager of the Oklahoma City Convention Center. “ We have to find a way to give people peace of mind and give them that confidence that they will be safe.”

To accomplish that mission, the center is employing state-of-the-art technology and equipment that adds additional layers of precautions to prevent the transmission of pathogens. The center is using Global Plasma Solutions’ Needlepoint Bipolar Ionization (NPBI) technology to deliver purified indoor air through the center’s air handling. The center is also using Xenex LightStrike Germ-Zapping Robots, which use a patented Pulsed Xenon UV light system to deactivate the pathogens at the wavelengths where they are most susceptible. The robots will be deployed to clean high touch surfaces. “This is the same technology used in hospitals,” Rojas said.

This article originally appeared in the Jan. 2021 edition of The Point.