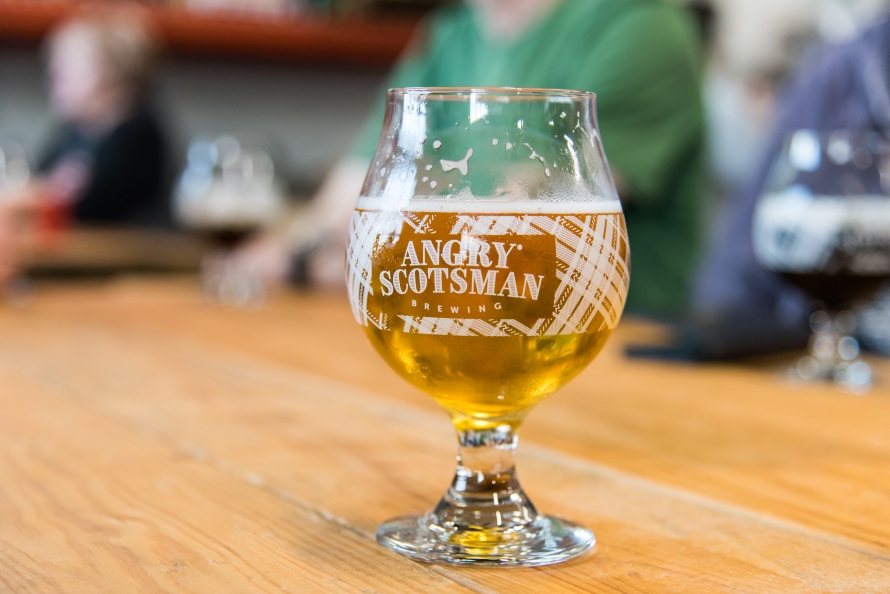 Ross and Stephanie are co-founders of Angry Scotsman Brewing.

The taproom is in a 1930s-era building that formerly served as an auto repair shop, although the structure has been vacant for several years. Harper took over the building, which has original walls and trusses, in 2017. After months of exterior and interior work on the building, he began production there in October, following a yearlong stint at the Brewers Union.

“I could go on for hours about the excitement and potential we see for this part of Oklahoma City,” Ross Harper said. “There is great character in the old warehouses in the area, and we hope to be a catalyst for additional development and expansion.”

He opened to the public in November, but has been serving beer out of a temporary, pop-up taproom surrounded by his brewing equipment and storage space.

“We’ve given a lot of consideration to every aspect of the taproom,” Stephanie Harper said. “We want to provide a space that’s comfortable and functional at the same time; a place where you can stop by before taking in a show at the theater, or just to grab a pint and catch up with friends.”

Ross Harper moved from Glasgow to Florida in 2001 for school, and then relocated to Oklahoma in 2005.

The space will be open seven days a week: from 3 to 10 p.m. Mondays through Thursdays; from noon to 11 p.m. Fridays and Saturdays; and from noon to 7 p.m. on Sundays.

On Sunday, Angry Scotsman will open early – at 10 a.m. – to serve as a post-race destination for those taking part in the Oklahoma City Memorial Marathon.

Shop Oklahoma City OKC's doing better than okay--and everyone else is taking notice! The city's been getting some fantastic accolades recently.

@okcretail 2020 is already ramping up to be one of the best and busiest years for OKC yet! There's ongoing MAPS projects, economic development, housing, exciting projects at the Innovation District and more.

@okcretail OKC was recently ranked among the top 10 millennial boomtowns in the US: which means that we have several Millennials coming to OKC and seeing lots of success in this market.
Welcome to OKC | Property Search | Success Stories | Districts - Regional | Districts - Neighborhood | News
maps | about us | contact us | sitemap