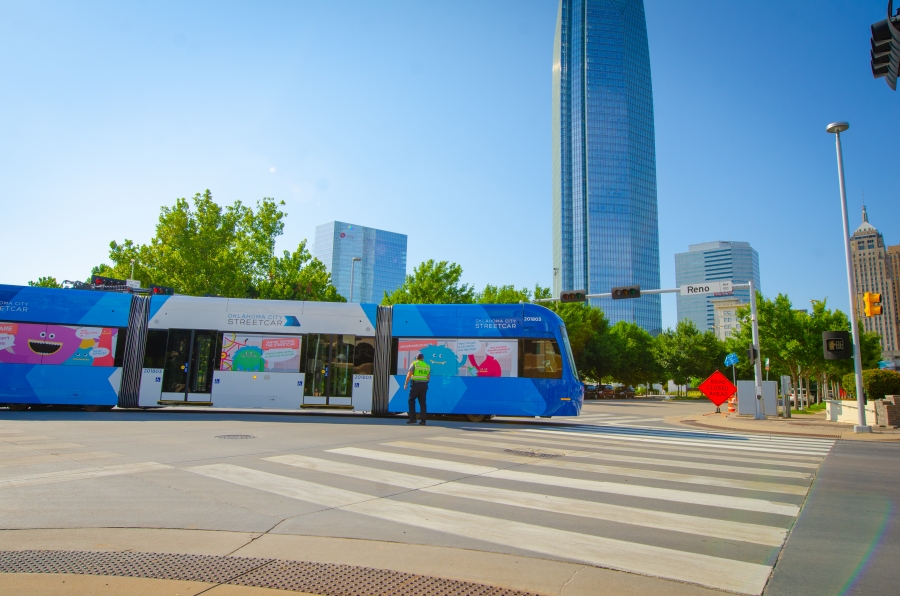 The promise of a new streetcar circuit downtown played a key part in about $1.6 billion in investment in downtown businesses since the MAPS 3 project was announced, Greater Oklahoma City Chamber President Roy Williams said.

The chamber recently revealed the results of a study that found that within a three-block range along the streetcar route, private interests have spent nearly $802 million since 2011. The total cost of projects such as Scissortail Park, Project 180 and the Oklahoma City Convention Center, in addition to general infrastructure improvements, is about the same.

The number of advertising sponsorships quickly snapped up along the route would seem to confirm Williams’ conclusion.

According to officials at Houck Transit Advertising and the city’s Embark transit authority, 13 of the 22 passenger stations across the downtown districts have been secured by high-profile sponsors such as Sonic Corp. and the Oklahoma City National Memorial. They are all local entities, said Adam Myszewski, Houck national sales manager.

“We’ve worked with businesses along the streetcar line, that’s where we started with streetcar sponsorships,” Myszewski said. “The memorial museum has a stop right at that location, for example. That was one of the first parties we contacted to sort of give them first rights of refusal.”

On Oct. 15, construction crews will finish the last bit of welding on the streetcar rail. Work will continue on overhead wires, testing and passenger platforms. Streetcar service is expected to begin Dec. 14.

The chamber of commerce’s report includes MAPS 3 projects in its tally for investment, even though the new convention center and central park were both announced at the same time as the streetcar. Project 180 is a streetscaping program driven by construction of the Devon corporate tower, which began in 2009 before voters approved MAPS 3.

Regardless, the chamber found an average of 730,000 square feet of space, residential and commercial, has been added downtown each year since 2011. The chamber estimated a 16-percent increase in jobs during 2011-2015.

The chamber study followed the streetcar route through its full 5.1 miles and 22 stops, from as far south as SW Third Street, north to Midtown at NW 11th, west as far as Dewey Avenue, and east through Bricktown to Russell M. Perry Avenue. Given a three-block range from the track, the study area covered about a third of the greater downtown area.

Houck Transit Advertising, based in Shoreview, Minnesota, won the bid a year ago for Embark’s advertising for the streetcar, Spokies bicycle share system and bus line. That includes arranging naming rights for the streetcar and sponsorships for individual passenger stops. Those stations will cost $2,000 to $3,000 per month, about the price of a billboard with graphics and digital technology, he said.

“We wanted to keep the look and design and feel of the streetcars while we produced an enhanced co-branding for naming rights sponsors,” he said.

Read the story at JournalRecord.com