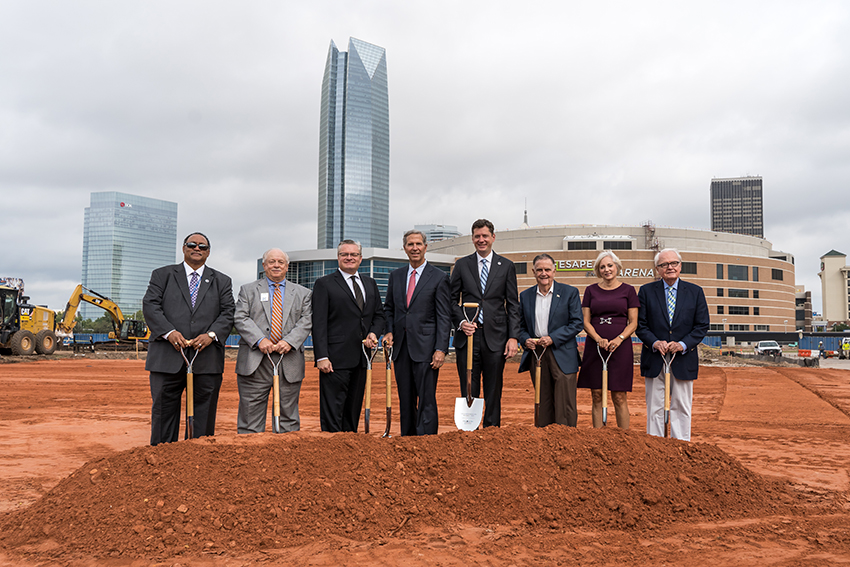 The 605-room hotel will be built just north of the new convention center, near the MAPS 3 Scissortail Park and the Chesapeake Energy Arena. It will also be served by the Oklahoma City Streetcar, which is expected to open in December 2018. The design calls for 50,000 square feet of ballroom and meeting room space to complement the space that will be available in the convention center. Omni Hotels & Resorts also place a high priority on culinary creativity. The hotel will host seven restaurants, including a steakhouse, a coffee shop, a burger bar and a rooftop poolside bar. The hotel is expected to be complete in 2021.

Rather than building what Omni refers to as “big-box hotels,” Omni focuses on providing luxury in a manner that is reflective of the natural surroundings and unique cultural flavor of the cities in which they are located.

“You will know you are in Oklahoma City when you step into this hotel,” Peter Strebel, president of Omni Hotels & Resorts, said.

The hotel project alone is expected to create more than 3,000 jobs and more than $370 million in economic activity, and when finished the hotel is projected to have an annual economic impact of $137 million. But beyond the financial impact, this project “will redefine Oklahoma City for residents and tourists alike,” Strebel said.

“As we created a city that people want to visit, we have created that demand and then some,” Holt said. “This hotel will meet a critical need of a city of our size.”

The City of Oklahoma City and Omni entered negotiations in September 2016 after Omni’s proposal was chosen because of its greater developer contribution and lower public participation costs. Cathy O’Connor, president and CEO of The Alliance for Economic Development of Oklahoma City, remarked that the negotiation process was made more meaningful and successful because of Omni's culture of professionalism and civility and the shared vision about what this hotel could be.

“Today is the culmination of three years of hard work to create this public-private partnership,” O’Connor said.

Oklahoma City Convention and Visitors Bureau President Mike Carrier agreed that Omni Hotels & Resorts consistently showed an enthusiasm and desire to be in Oklahoma City, which was reflected during the negotiations and development plans. And when compared to the experience of planning a new headquarter hotel in another city, Oklahoma City’s process had its advantages.

“In Oklahoma City, it’s done easier and better, with a lot fewer problems and a lot more camaraderie,” Carrier said.

Robert Rowling, owner and chairman of TRT Holdings Inc., the parent company of Omni Hotels & Resorts, remarked that his company owed it to Oklahoma City residents to deliver on their investment. Rowling also said that the presence of an Omni Hotel in a city typically leads to increased success in the hospitality industry.

“When we open this, it will be beyond your expectations,” Rowling said. “It will change the face and trajectory of your city.”